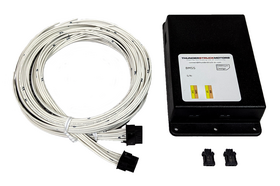 Thunderstruck BMS satellites are connected to a BMS controller via daisy-chain communication networks (isoSPI). Multiple satellites allow monitoring a large number of cells in a pack, with various cell configurations. A BMS Satellite cannot operate without a controller.

Examples of BMS controllers from Thunderstruck are the BMSC (BMS Controller) and the MCU (Master Control Unit).

- The BMS Controller manages 24 cells alone, and wth 24-cell satellites added, can support up to 96 cells.

- The MCU does not manage cells alone, but connects to either 24-cell or 18-cell satellites to manage as many as 288 cells in a pack.